A testament to the creational powers of natural forces, Bryce Canyon National Park boasts astonishing vistas of intensely colorful limestone rocks formed through headwater erosion initiated from a central watercourse, meaning that it's technically not a canyon. Rather, this series of horseshoe-profiled amphitheaters are actually the eastern edges of the Paunsaugunt Plateau within southern Utah that have been shaped by water, winds, and overall geological mayhem at its finest. 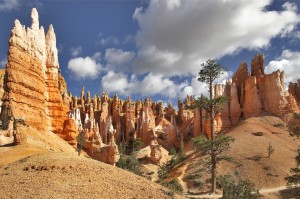 When the first hunter-gatherer natives arrived in what is now Bryce Canyon, there was ample wildlife and fertile lands, and evidence indicates that these lands sustained tribes dating back to 10,000 years ago. Archaeological findings show that the basket weaving Anasazi, the Pueblo, and the Fremont natives spent time here.

The Paiute Indians headed to the region just as other cultures were moving on. The Paiute understood the finer practices of cultivation techniques, and were exceptional hunters, allowing them the resources to survive where others could not. Most notably, the Paiute were known for their mythology concerning the grand spires in the canyon known as hoodoos. To these primitives, the hoodoos represented the Legend People that were turned to stone by the trickster Coyote.

Scouted out by the Mormon population in the 1850s as a potential new home, the first settlers arrived in droves over the following decades, including the park's namesake, Ebenezer Bryce. A Scottish immigrant who made his home just below Bryce Canyon Amphitheater, his unusual little abode became known locally as "Bryce's canyon," and the name stuck. As the lands lost fertility, become overgrazed, and water and food supplies grew scarcer. Many of the natives and Mormon families moved on to nearby states, including the Bryce family by the early 1900s.

Originally declared a National Monument in 1923, Bryce Canyon moved up to National Park status in 1928, and its lands today are graced with stunning geological wonders, hosts of fascinating views, and is teeming with native wildlife.

Scenic walking and driving tours abound within the landscapes of Bryce Canyon, which boasts some of the world's least polluted air and offers visibility of three states up to 200 miles away. Slot canyons with rims as high as 9000 feet and intricately formed hoodoos make for exciting and memorable explorations throughout the park. Make the most out of explorations in the park by embarking on the free shuttle system in Bryce Canyon National Park. Most visitors take advantage of at least one free Ranger Led Program while at the park, but all can be tackled with self-guided tours.

These are some of the top ranger-led programs and attractions in Bryce Canyon National Park, and most are available during the summer, spring, and fall seasons.

Rim Walks – 1-hour walking tours along the very rim of Bryce Amphitheater as you head to Sunset Point. Learn fascinating historical and geological facts along the way, and consider heading out at the best part of the day – sunset. Hike the moderately-rated Rim Trail in about five hours to see the park's wonders. Drive the rim to view 13 unforgettable viewpoints that overlook the sights of Bryce Canyon or step out and take a hike along one of the marked trailheads.

Popular Hiking Trails and Scenic Lookouts – Spend an hour on Bristlecone Loop to view Rainbow Point or spend two hours hiking Queens Garden to take in the best sunrise on earth at Sunrise Point. Navajo Loop takes about an hour and leads to Sunset Point while the Tower Bridge Trail is a three-hour journey to the same lookout. Those seeking advanced hiking trails in Bryce Canyon should tackle Fairyland Look or Peekaboo Loop, and both offer rewards worth of hike's effort.

Astronomy Programs – Offered frequently throughout the year, the clear skies over Bryce make it ideal for unparalleled stargazing. Rated a 7.4 magnitude night sky, these are some of the darkest on the continent. In addition to public stargazing gatherings and evening astronomy programs, June brings the Annual Bryce Canyon Astronomy Festival, which is a major event within the park.

Horseback Riding – Ranger-led excursions are offered April through October and horseback riding is a unique way to explore the canyon, allowing you to traverse where cars cannot.

Snowshoeing and Cross-country Skiing – The most popular winter activities in Bryce Canyon occur in the amply snow-covered days of winter. See the national forest in a truly unique way! Equipment rentals are available in many park locations.

Plan Your Stay in Bryce Canyon

Bryce Canyon is a must see stop when touring in Utah. Here you will find information on lodging reservations in Bryce Canyon National Park. ...
Read More

Closest Accommodations to the Entrance o...

Bryce Pioneer Village is located in the ...

Bryce View Lodge is set in the perfect l...