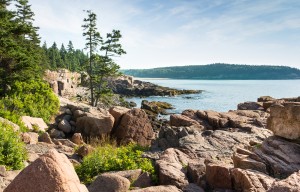 Acadia National park is classic coastal Maine. The majority of the park sits on Mount Desert Island, so named by Samuel Champlain in 1604. Additional parklands enjoy protection on the Schoodic Peninsula to east, Isle au Haut to the southwest and a dozen smaller islands. Stand on the summit of Cadillac Mountain and look a little west of due north on a clear day to see a more famous Maine peak, mile-high Mount Kathadin.

Any direction one looks in Acadia National Park and they'll understand why the Wabanaki Indians, native to this island when Europeans arrived, called it Pemetic, which means "the sloping land." These gentle slopes are evidence of Acadia's glacial legacy, and several lakes and ponds with great depths and clear blue waters are surrounded by blueberry thickets and sugar maples.

It's believed that the first Europeans encountered the Wabanaki in the 1500s, and the history of these peoples can be explored at the Acadia Abbe Museum just off Park Loop Road adjacent Sieur de Monts Springs. An expanded museum is in Bar Harbor. Eventually, more European settlers came here, but most just passed through – that is until lumbering became popular.

Concerned about overlogging, summer residents created a public land trust to protect the area from uncontrolled development in 1901. The next few years saw more citizen-led efforts to stave off modern industrialization and more efforts made towards the creation a park to be set aside for future generation's enjoyment and recreation.

This park is unique in that these lands were neither public nor acquired by the government. The very people who most heartily agreed that the park should exist generously donated the land that is Acadia today. With such generously demonstrated enthusiasm behind it, an unusually graceful combination of tame and wild survives in the park today. Eventually, Lafayette National Park was created in 1916 and later named Acadia National Park in 1929.

The most notable event in the modern history of Acadia National Park is by far the Great Fire of 1947. After a hot, dry summer this disastrous fire damaged thousands of acres of the park, totally devastating most parts of Bar Harbor and ending an era of solid, successful tourism at Acadia which of course, eventually bounced back stronger than ever.

Acadia is open year round and offers a relatively temperate climate with warm summers, mild spring and fall seasons. Winters are nice in Acadia, and road closures may occur in extremely snowy conditions. Of course, the autumn is one of the most eye-catching times of year in New England, and Acadia National Park's carriage roads and scenic coastline drives are simply stunning. Photography and wildlife viewing opportunities abound year round, but fall is a standout..

On one hand, Acadia features some charming attributes of early 20th century recreational planning such as its system of charming carriage roads and elegant stone bridges. On the other hand, it is, after all, in good part a wild place, its ecological nooks and crannies crammed with fertile worlds. The 55 miles of Carriage Roads aren't to be missed, and these meander through the eastern side of the park. Magnificent hand-hewn, stone-arched bridges that were commissioned by the great J.D. Rockefeller connect these gravel-topped carriage roads.

Activities and wildlife viewing at Acadia National Park are superfluous because the park boasts three distinct ecological zones: an intertidal zone rich with wildlife in the dramatic sea cliffs and along the rocky shorelines, forests that combine northern boreal and eastern deciduous, and 20 percent of the park is wetlands of all types from salt marsh to peatlands. Conservation writer Freeman Tilden once wrote, "this is a place where you can stand with one foot in the brine and one on the blossomy land."

Driving and exploring the coastline is inevitable, and the Wonderland off Route 102A near the Bass Harbor Light is an easy path that leads down to the ocean. Those looking to avoid the large boulders on Loop Road while searching for awesome tide pooling spots will appreciate Wonderland trail. Wildflowers and beach roses are common sights here in the summertime. Hiking the Acadia Mountain Trail or the Cadillac Mountain North Ridge Trail both make for remarkable experiences, and the popular Acadia Mountain Trail climbs just under 700 vertical feet and goes over the summit of the mount with a mile and half moderate hike.

Lighthouses in Acadia are a huge attraction year round, and one lighthouse, the Bass Harbor Head Light stands on Mount Desert Island and is fully operational. Constructed in 1858, it's one of New England's most scenic and is on the National Historic Register. Tours of the grounds only are permissible, and five other lighthouses may be viewed nearby.

The distinctive Bar Harbor Hotel – Bluenose Inn overlooks the fantastic Frenchman Bay. Choose from two distinct buildings to take quarters and personalize the experience. The ultra-luxurious Atlantic Oceansideoffers the most exclusive lodging at Acadia National Park, with only 8 guestrooms situated upon dozens of acres of lavish gardens with ocean views. Those seeking historic lodging in Acadia National Park need look no further than the Acadia Inn. Completed in 1884, the historic Acadia Hotel is newly renovated for modern conveniences without sacrificing it's authentic Victorian charm.

Acadia is New England's national park, as such, you know that it has to put on a pretty good show of fall colors to live up to the areas reputation. ...
Read More

Where to Stay at Acadia National Park

Acadia National Park lodging is as historical and unique as the park itself. Read the following descriptions to get a better idea of all the accommodation options that are available to you in and around Acadia National Park. ...
Read More

The Atlantic Oceanside is located on Fre...

Located in the heart of downtown Bar Har...

Residing in the heart of downtown Bar Ha...

Dwelling on a quiet side street in downt...