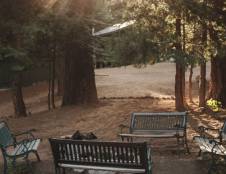 Silver City Mountain Resort is a family-owned historical retreat and lodging property located inside Sequoia National Park. Roughly 1.5 hours from the Three Rivers entrance of the park and 2 hours 20 minutes to get to the Wuksachi area.  Silver City Mountain Resort carries with it, a great deal of history dating back for centuries. The Resort and it's neighboring communities of Silver City and Mineral King, boast more chapters of California history than any other community within the High Sierras.

The first verifiable homestead was established in the region back in 1856 by a man named Hale Thorpe. In the years that followed more people began visiting the area and they fell in love with the beauty and the climate. The region became a popular summer retreat where valley ranchers and wealthy residents would escape to during the warm summer months to get a break from the valley heat.

During the 1870s rumors began to spread that there were abundant riches available to be mined from the mountains surrounding Mineral King, and hopeful miners and prospectors began flocking to the area. However, over the proceeding decade, these claims of riches began proving out to be only rumors. A tragic avalanche occurred on April 16, 1880, destroying the Silver City mine and driving the final nail into the coffin for the areas mining industry.

By the late 1800s, the area was no longer considered a viable mining opportunity, but it was still quite popular for its beauty and recreational opportunities. In the late 1880's many prominent valley residents and politicians began petitioning the Federal Government to declare the area as a national park, and in 1890 Sequoia and General Grant National Parks were established.

Mineral King is one of the least well-known places in the United States. The area is not crowded and there are plenty of unpaved trails where you will be unlikely to see anyone else for miles around. Mineral King offers many hidden treasures from awestruck views from its peaks to waterfalls and crystal clear lakes. Journey into the forest and take a breath of fresh air while you walk among giant trees, wildflowers, and gaze up at snow-capped peaks.

The John Muir Lodge pays tribute to the ...

Experience Sequoia the right way, in comfort and style as our drivers and guides share ...

Of the many special sites to see in Sequoia/Kings Canyon, there is no better ...