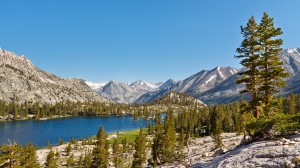 Sequoia and Kings Canyon National Parks present a geological and ecological spectacle to behold. The massive Sierra uplift tilted this section of the Earth's crust to the west, and the mountains plummet steeply to the east while sloping more gently to the west. Glacial activity carved out what we see today, which is an ever-changing, yet amazingly resilient wonderland. These unified parks are interlaced with steep canyons and boast several peaks with 12,000-plus foot summits including Mount Whitney.

This unusual range of topography is home to many ecological communities, an underground cavern system, and the world's most notable giant sequoia forests. Several visitor's centers are convenient around the parks, and many seasonal activities are led by forest rangers so visitors will have expert guidance. Activities will vary depending on the season of travel; however, the region is spectacular year round.

The History of Sequoia and Kings Canyon National Parks

Natives have traversed the Southern Sierras for at least seven thousand years, both in the higher peak regions and the western foothills. These hunter-gatherer tribes were primarily Monache natives, but several cultures of differing languages and practices seasonally shared the lands. Across the way along the Great Central Valley, the Yokuts primarily roamed and hunted, and today, the parks preserve more than 500 Native American historical and archeological sites, and this collection grows every day as project surveys discover more relics.

The late 1700s brought forth Spanish agents exploring the Sierra Nevada's, and fur trappers, miners, loggers, and sheepherders came along in the mid-1800s in search of their livelihood. These competing interests managed to keep the hold on much of what is now Kings Canyon and Sequoia National Parks long after communities all around the San Joaquin Valley demanded these land's preservation. Sequoia National Park was established in 1890, but the fight for King's Canyon had just begun.

John Muir visited the Kings Canyon and Sequoia region in 1873 and had his own theory about how the valleys and mountains were formed – by massive glaciers – and he was proven correct. His interest in the area is what inspired activists and perhaps even Harold Ickes to fight so hard for Kings Canyon's creation. Ickes hired photographer Ansel Adams to capture the beauty of the region, which surely played a role in the passage of the bill in 1940 to do so.

Part of what makes the area so unique is the extremely varied seasons that will certainly be a factor during any visit.

Spring – April to June is when the Sequoia groves still tend to harbor some snow. The rivers and creeks run swiftly with chilly waters and can be particularly dangerous. Warmer weather brings an abundance of wildflowers to the foothills, and Crystal Cave reopens for walking tours. Rafting, biking, hiking and golfing get started as the spring arrives.

Summertime – July to mid- September sees the last of melting snow and most facilities open for business. Free ranger programs are widespread, and activities are virtually limitless in the parks. Spring activities expand to include water skiing and other water-related pursuits get into full swing.

Fall – Mid-September to Novembers is when the groves get chilly, and light snow may fall. Activities are somewhat reduced, as are ranger tours; however, hiking is a favorite autumn activity as well as fishing.

Winter – Long winters from November to April brings loads of snow to the Sequoia groves, yet many outdoor winter activities abound. Winter wildflowers are abundant in the foothills, as is solitude.

Both parks feature visually stunning attractions and amazing hiking trails that won't disappoint. There are even two sections of Kings Canyon National Park to consider: General Grant Grove and the Redwood Mountain Grove, where the largest natural grove in the world of remaining giant sequoias survives. Some top attractions within Sequoia and Kings Canyon include:

Tunnel Log – Cut through a felled giant sequoia tree that made the road impassable, park experts simply transformed into a tunnel to reopen the byway.

Tokopah Falls Trail – Just past Marble Fork Bridge, it's an easy hike to Tokopah Falls where the lovely granite cliffs and mighty waterfall of Tokopah Canyon await. Summertime viewing is the best.

Crescent Meadow – A smaller meadow in the Giant Forest area of Sequoia, this place was the most visited by John Muir who dubbed it, "The Gem of the Sierras." While in the area, stop into the Giant Forest Museum.

Moro Rock – In the center of the park between Giant Forest and Crescent meadow, Moro Rock boasts a 400-step stairway allowing visitors to reach to the top for the amazing vistas that encompass most of the park, including the Great Western Divide from heights of 6700 feet.

Whether you're looking for lodges in Sequoia National Park or Kings Canyon National Park lodging, visitors are afforded many fantastic options besides backwoods camping.

Premium lodging in Sequoia National Park includes the Wuksachi Lodge, which boasts a full-service restaurant, lounge, shops, and is right in the heart of Sequoia's action. Premium Kings Canyon National Park lodging can be enjoyed 365 days per year at the all-inclusive Montecito Lodge. Those looking to get back to nature will appreciate the ruggedness of the John Muir Lodge, which pays tribute to the naturalist and author who avidly sought protections for these two parks. The Grand Grove Cabins are a short stroll from the General Grant Tree and offer convenient access to the park.

Come explore the seasonal wonders of Kings Canyon and Sequoia National Park. Drive the scenic trails, embark on the rugged hikes, and make the journey to the Sierra Nevada and experience some of nature's finest work.

Hotels in Sequoia National Park encompass many types of lodging options. Here you will find everything from comfortable motel rooms to elegant lodges. Plan your trip for one night to 2 two or more weeks. National Park Reservations will make your booking ...
Read More

The John Muir Lodge pays tribute to the ...