The Beauty, Adventure and History of Zion National Park 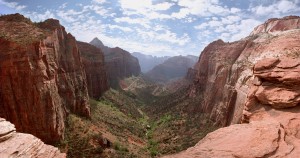 From the highest elevations in Zion National Park at 8700-foot Horse Mountain Ranch to the lowest elevations at 3,300 along Coal Pitts Wash, this picturesque terrain in southwestern Utah is stunning year round. Zion boasts mazes of sandstone canyons, towering plateaus, magnificent waterfalls, more than a 1000 plant species, and a diverse wildlife population. Zion's abundance of beauty and nature work in synchronicity with the elevation variances– from the mighty Virgin River and its gushing tributaries to the endangered California condors that soar high above the coral cliffs, every living thing within the park plays a role in the region's wonders.

The History of Zion National Park

A decade after Zion's establishment as Utah's first national park by President Woodrow Wilson 1919, the dream of a "Grand Circle Tour" route whereby visitors could seamlessly explore nearby parks like Bryce Canyon National Park, Grand Canyon National Park, and Cedar Breaks National Monument was realized. In 1930, the official unveiling of the Zion-Mt Carmel Highway saw one of the nations most intense engineering feats achieved, as did the 1.1-mile Zion-Mt. Carmel tunnel's creation – a sight that greets visitors at the park entrance.

However, long before all this progress was ever imagined, native settlements including the Anasazi and the Paiute peoples called Zion's lands homes. The earliest visitors 12,000 years ago hunted large game like wooly mammoths, camel, and giant sloths, but later learned to hunt smaller game with the extinction of these species. Many Anasazi headed southeast about 800 years ago seeking better hunting and land conditions, but the Paiute peoples remained – for a while. Disease and starvation plagued the Paiutes, and they lost nearly 75 percent of their community shortly after the arrival of Mormon settlers around 1860.

The rich history of Zion National Park and its earliest inhabitants are well recorded in the Zion National Park Museum. Home to more than 290,000 artifacts, Zion's Museum represents the cultural, natural, and geological history of the park. Various historical sites are also noted throughout the park and are observable on informative ranger-led tours and self-guided tours. To reduce park congestion and foster its preservation, visitors can only access the Zion Canyon Scenic Drive via Zion's free Canyon Shuttle Bus tours that operate from April to October or by utilizing park-operated trams.

Zion's Many Seasons: When to Visit Zion National Park

Although a desert-like terrain, Zion's seasons are distinct. As expected, summer brings ideal conditions for backpacking, canyoneering, biking, hiking, and outdoor pursuits, but it is rather hot. Spring is more temperate; however, it can be stormy and the weather unpredictable, but the wildflowers and wildlife make up for it. Fall's cooler weather brings out the stunning hues of Zion's juniper and conifer woodland communities. Winters are typically mild, but heavy snowstorms aren't uncommon, especially at the cooler, higher elevations.

Hiking and sightseeing are two of the most popular Zion National Park activities, and a wealth of Visitor Centers and free ranger-led tours ensure visitors have ample means to access the splendors of the park. Junior Ranger Programs are active from Memorial Day through Labor Day from the Zion Nature Center, and horseback riding treks, evening programs, and nature walks are available March to November.

The Narrows is by far the most popular of all hiking trails in Zion, but it's also one of the most difficult at 12.5 miles and the most dangerous with flash-flooding a possibility. The rewards are some of the most amazing views of soaring sandstone walls and grottos, hanging gardens, and incredible waterfalls. However, hiking The Narrows includes hiking (sometimes in) the Virgin River. More than 50 percent of the trek is spent walking, wading, and occasional swimming in the river.

Zion's Main Canyon is like an oasis within the park and is the most popular scenic driving tour in the park. Visitors can view the Narrows, Weeping Rock, Hidden Canyon, and Emerald Pools along this route. Canyon Overlook Trail is an easy hike that starts outside the east entrance of the Zion-Mt. Carmel Tunnel, which leads to an observation point offering panoramic vistas of the Park.

Angel's Landing offers rewarding views of impressive geologic formations for those who make the demanding round trip trek up the West Rim Trail. The primitively landscaped Kolob Terrace is west of Zion Canyon, and Kolob highlights include The Subway, thrilling slot canyon hikes, the observation lookout over Lava Point, and the striking Kolob Arch – the second largest on the planet.

Visitors planning to backwoods camp will have three campsites to choose from Watchman and South along the southern end of the park and Lava Point, which is the only primitive campsites in Zion. Permits are required for back-country camping.

However, if comfort is key, the lodges in Zion National Park offer the best access to the features of the park, but there are also excellent lodges near Zion National Park that are just minutes away from both the park and modern conveniences. Those looking for lodging in the park should consider the Zion Lodge, which is midway through Zion Canyon. Boasting year-round cabins and motel-style accommodations with amenities including a restaurant and gift shop, guests must book early to land a room at Zion Lodge.

Lodges in Zion National Park include recognizable accommodations like the Best Western Zion Park Inn, which is gracefully tucked amid Zion's glorious red rock cliffs and features amazing vistas of the park. Those seeking Zion National Park lodges geared for adults seeking peace and quiet will relish at the Novel House. Nestled cozily at the base of Zion's sandstone cliffs, Novel House is truly a couples retreat that inspires romance.

Come explore the beauty of Zion National Park, and make it a truly memorable vacation by including visits to nearby National Parks.

With so much to see and do a Zion National Park vacation is fun experience. National Park Reservations will assist you with all you Zion lodging needs. ...
Read More

The Beauty, Adventure and History of Zion National Park