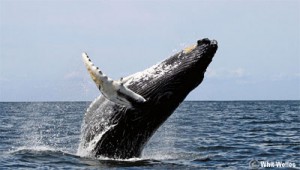 Plenty of whale watching bluffs and beaches can give you a chance to glimpse any of the three seal, two sea lion and seven whale / dolphin species, as well as both the sea otter and the river otter. River otters are more commonly seen in the rivers where there are seven species of andromedous fish species that live parts of their lives in the ocean and return to their home river or stream to spawn. Two types of beavers live in and along the rivers as well as the muskrat.

Six salamanders reside in Olympic National Park including the Olympic torrent salamander which is endemic to the area. Four frogs, the western toad, the Oregon ensatina and the rough-skinned newt complete the amphibian community in the park. Two species of garter snakes, the rubber boa and the northern alligator lizard make a total of four reptilian species. 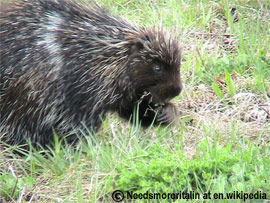 Many little mammals live in the park as well. Four moles, including the endemic Olympic snow mole and six species of shrew can be found on the forest floor. Three mouse species and three rats make plenty of food for the larger animals of the park. The Olympic chipmunk, Mazama pocket gopher, Olympic marmot, fisher and the short-tailed weasel are all unique animals to the Olympic Peninsula. Fishers were thought to be extirpated from the peninsula, but hope was restored with a recent re-introduction of several fishers to the area.Snowshoe hare, spotted and striped skunks, marten, mink, raccoon and the porcupine also dwell in the forests of the Olympic Mountains.

Five types of voles live both on the ground and in the trees eating forest fungus. Red-backed voles sniff out fungal truffles, a human delicacy, below the ground for their food source. The northern flying squirrels like to nest in previous woodpecker holes and also dine on the delicious forest truffles as well as nuts, seeds and oddly, meat if it is available. Chances are that the flying squirrels could be inhabiting a tree hole from a rare pileated woodpecker. These are the largest of the woodpeckers in the United States and are specially adapted for pecking. In fact, they have thicker skulls that contain a liquid that helps to absorb the shock of the pecking. Both voles and flying squirrels need to watch out for the Northern spotted owls who favor these tree rodents as snacks. To finish off the small mammal's roster are eleven bat species that help to keep the insect population down in the forest. 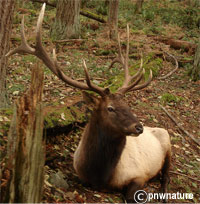 Red fox, coyotes, wolves, bobcats and mountain lions prowl around the park for various small animals to munch on. The Columbia black-tailed deer, Roosevelt elk and black bear all like to hang out/hibernate in the lowland forest areas during the winters. In the summers they all head for higher ground. Olympic Peninsula's herd of Roosevelt elk is the largest population of un-managed animals of this subspecies. It is common to see groups of elk in the lowlands west of the park.

Olympic National Park is like a wildlife preserve, full of endemic species that have evolved in isolation. This creates some very unique Olympic Peninsula specific animals (plants, too.) When you visit Olympic National Park, make sure you look and listen for the clues to help you spot some of the living superstars of the forest and coast. Don't forget about the adored banana slug that slime's across the obstacles of the forest and leaves a gooey trail.

National Park Reservations offers the most Olympic National Park lodging options for your vacation this year and in the future. ...
Read More