The sheer beauty and magnificence of Grand Canyon National Park have inspired the greatest naturalists and crafters of literature to recruit their most ambitious adjectives in attempts to capture a fraction of its aura with words. Interestingly, even the greatest writers of our time admit to failing in their quest... 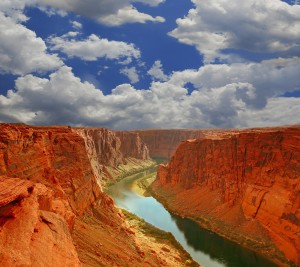 The Colorado River and its tributaries have carved the most famous canyon in the world in what is a short period by geological standards with the bulk of the erosion taking place over about two million years. The now exposed terracing of the canyon walls’ – layers of sedimentary rock, sandstone, shale, and limestone reveal history dating back two billion years. To this day, the Colorado River and its collaborators remain the life source of this remarkable place, and the park continues to evolve due to these rushing waters, the freeze-thaw cycle, flash floods, and rock slides.

Today, visitors can explore this 277-mile long and 4-15 mile wide canyon with depths ranging from 3500 to 6000 feet deep to see the signs of its arduous formation. Its creation began roughly 65 million years ago when the Rocky Mountains began to rise, as did the Colorado Plateau. These stacks of rocks would eventually form the walls of the Canyon, and precisely how the Colorado River descended from the Rockies and began to flow across this site is a complicated puzzle for even today’s geologist.

Afforded its first Federal protections in 1893 as a Forest Reserve through the diligent efforts of then-Senator Benjamin, president Theodore Roosevelt also played a vital role in the park’s establishment. After a visit to the region in 1903 left him awestruck stating, “Let this great wonder of nature remain as it now is. Do nothing to mar its grandeur, sublimity, and loveliness.” Roosevelt went on to establish the Canyon as a Game Preserve in 1906, and it was declared a National Monument in 1908. However, it took many years and Senate acts before the park’s existence was formally signed into law by President Woodrow Wilson in 1919.

Many of the park’s original historic structures, including the elegant El Tovar Hotel are enjoyed by travelers, who quickly discover that visiting this geological wonder and exploring it today is easier than ever before.

Most visitors consider approaching their explorations from two starting points: the North Rim and the South Rim. However, those wanting to discover the architectural feat commissioned and owned by the Hualapai Indian tribe, The Grand Canyon Skywalk, will have to venture to the eastern side of the canyon. Many visitors opt to seek Grand Canyon Lodging inside the park, so minimal driving is required to see the best of the canyon.

Grand Canyon Lodges In the Park

Standouts include the historic El Tovar Lodge, one of the first quarters established in the Grand Canyon Region in 1903, the hotel was built at the Grand Canyon Railway terminus and still services guests to this day. Bright Angel Lodge is ideal for the adventurous traveler. Close to the Bright Angel Trailhead and known for comfortable quarters, the Thunderbird Lodge is an option right in the center of the canyon’s Historic District.

The North Rim promises more remote terrain and fewer tourists and traffic, particularly during the winter months when North Rim is often called Winter Rim. Naturalists flock here, as do nesting bald eagles in the wintertime, and they nest regularly at the mouth of Nonkoweap Creek.

The only lodging inside the Park on the northern rim is the Grand Canyon Lodge, which gives visitors proximity to the best spots for seeing the canyon with easy access to Bright Angel Point, Cape Royal, and Point Imperial. The Bright Angel Point trailhead is a short half-mile trail hike near the Lodge. From the trail, one can hear Roaring Springs, which rush 3,600 feet below the rim and hikers are also rewarded with views of the Canyon Village along the South Rim.

The South Rim is where the majority of the action happens, including the magnificent sites of the Desert View Drive, which follows the South Rim for 25 miles toward the East Entrance. Six of the finest panoramic viewpoints and several unmarked pullouts offer the finest views of the canyon including sites like the Tusayan Ruins and the Desert View Watchtower.

The Grand Canyon South Rim offers an abundance activities including organized tours by bus or hummer, horseback rides into the canyon, air tours, and river rafting experiences. However, many of the best trails involve a bit of driving and hiking, and guided walking tours offer the safest and most informative way to explore the Canyon. Popular journeys include Pipe Creek, Hermit’s Rest, and Mather Point – all accessible via the South Rim.

Grand Canyon lodging along the South Rim offers superior amenities and easy access to the best of the region. The most popular lodging along the South Rim is The Grand Hotel, which boasts western interiors and several guest activities and services. Perhaps the Canyon’s only resort-style hotel, the Best Western Grand Canyon Squire Inn’s luxury amenities are in order. Those sticking to a budget will find that they can rest easy when calling the Red Feather Lodge home base.

There’s no experience comparable to embracing the rich history of Grand Canyon National Park, and regardless of the activities and accommodations are chosen, prepare for a unique, memorable vacation of a lifetime.

The majority of Grand Canyon National Park is Sonora Desert. The Lower Sonora extends from the inner Canyon at the Colorado River. ...
Read More

Experience luxury camping at Under Canva...

Yavapai Lodge is located by the Market P...