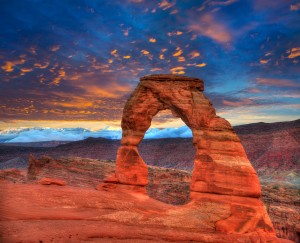 At Arches National Park in Utah, Jurassic sandstones in lurid hues of reds and oranges, stressed and tilted by unhurried geological forces were cracked deeply into long parallels and patterns. Erosion gradually widened these gaps until only freestanding slab-sided ridges, or fins, remained. As weathering continues, a window opens up in the rock, inviting more weathering until nothing remains but a narrow sandstone arch suspended over the Slickrock; hence, the creation of many of Arches National Park's 2000 wonders.

The History of Arches National Park

Arches have seen many travelers and settlers in its time, as hunter-gatherer tribes frequently came here as early as 10,000 years ago for seasonal hunting and to use the plentiful quartz rock for tool making. Some of these early visitors created piles of debris while crafting tools that can be spotted with a trained eye.

Known to us as the ancestral Puebloans, these migrants didn't appear to settle or build many homes here, but it's possible that this evidence was destroyed over time. What is known is that 2000 years ago evidence of cultivation in the Four Corners region exists, and these settlers constructed homes in villages much like those found at Mesa Verde, so perhaps the Pueblo were merely seasonal guests in Arches.

Over-farming and dry lands likely fueled any natives that had settled to move along to greener pastures around 700 years ago, and the nomadic Shoshone, Ute, and Paiute eventually took their place. It appears that many of these native tribes left their mark on the region through their exquisite displays of petroglyphs and rock art, and some of the most popular works are viewable today at Wolfe Ranch.

These latter natives likely encountered the first Spanish explorers of the era in the late 1700s who came in search of new travel routes to their missions in California. One such route is today known as the Old Spanish Trail, which passes just outside the park's Visitor Center along Highway 191.

Many changes and expansions have taken place at Arches since the park's initial establishment as a National Monument in 1929 by President Herbert Hoover. The boundaries have been expanded many times, and Arches National Park was dedicated as a national treasure once again in 1971.

Arches must seem eerily familiar to many visitors, and it's no wonder. Great storytellers and countless movie makers have called upon these lands for inspiration and background scenes. In fantasy folklore, this is the Barsoom of Edgar Rice Burroughs and the Tatooine of George Lucas. Many met Indiana Jones under one looming fin as he snatched the cross of Coronado from the wicked treasure hunters.

More than 2000 natural arches grace the park, with the largest being Landscape Arch and the most famous being Delicate Arch, which is a highly recognized symbol of the state of Utah that even appears on a postage stamp. Arches in the Salt Valley Wash area are plentiful and include Navajo Arch, Double O, Tunnel Arch, and Broken Arch. Delicate Arch is on the eastern side of the park near Wolfe Ranch.

The Southern region of Arches features Double Arch, the North and South Window, numerous rock pinnacles, and the spectacular Parade of Elephants and the intricate Balanced Rock. Head South to explore tall sandstone fins and columns that include Courthouse Towers, The Organ, and Tower of Babel. These sights are convenient to Courthouse Wash and the Petrified Dunes just adjacent to the Park Headquarters and Visitor Center.

There is no shortage of thrilling activities in Arches National Park and throughout the surrounding Moab region. This eye-catching park is a photographer's paradise with startling contrasts of blue skies, red rocks, and surprisingly green plant life, and those who love canyoneering and backpacking won't find better terrain in the southwest. Biking, climbing, hiking, horseback riding, are the most popular activities in Arches, and many of these may be enjoyed through seasonal Ranger-led park tours.

Travelers can partake in boating and river rafting along the mighty Colorado or exciting air tours through various outfitters near the park. Many excursions allow visitors to make a day of it experiencing several top sights and attractions in Arches National Park. This land of intense extremes is one of heat, cold, wind, and dryness, with seasonal climates varying greatly. However, this is primarily a desert, and visitors must keep hydration and sun protection in mind at all times while visiting the Colorado Plateau and enjoying its 375 species of high desert wildlife.

Arches National Park lodges are as unique as the arches themselves. A popular lodging near Arches National Park is proximal to two other area attractions: Canyonland National Park and Dead Horse State Park. The Big Horn Lodge is just minutes from popular viewpoints and park attractions and features many conveniences and amenities ideal for budget-minded travelers and families.

Seek out comfortable quarters at the Canyonlands Inn, a remarkable lodging near Arches National Park situated in the heart of Moab, Utah. Proximal to dining, shopping, museums, and the splendors of the park choose Canyonlands Inn for convenience and comfort. The Best Western Greenwell Inn offers fabulous amenities including on-site dining just minutes from the heart of the Canyonland and all the action of nearby attractions.

Carved and constructed by wind and water, Arches National Park is a land of unique beauty with an interesting history that boasts abundant adventure today. ...
Read More

Arches National Park located in southeastern Utah is one of America's most unique national parks with a very distinct profile all it's own. ...
Read More

The Moab Springs Resort is located on th...

The Red Cliffs Lodge sits on the banks o...