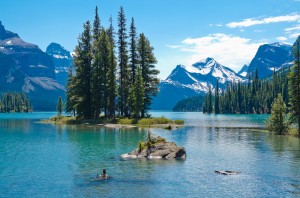 The History of Jasper National Park

Much like the childhood tale of a determined little engine, Jasper National Park represents the 'little community that could.' Having recently celebrated its 100th birthday, the community of Jasper is the most northerly Canadian Rocky Mountain National Park and it's also the largest. A World Heritage Site that happens to encompass Glacier National Park to its south, Jasper National Park offers almost 11,000 miles of Canadian mountain wilderness that provides seasonal enjoyment to millions of visitors each year.

Sights of the 'old Jasper' are still plainly visible in the town proper, with structures like the historic train station, post office, the old fire hall, and the Jackman and Robson Houses still on display. Visitors can step back in time by taking a walkthrough tour to soak in the old west vibe that is still here today.

Surveyor David Thompson, the first to undertake such a journey, best documents the history of Jasper National Park after the 1810 visit to Alberta's Athabasca Valley. Shortly thereafter about 1813, the North West Company constructed a supply depot next to Brule Lake, which came to be known as the Jasper House after the supply clerk Jasper Hawes. Trappers, traders, and missionaries traversed the terrain over the mid-1800s adding to the lure and mystique of this rugged backcountry territory.

In 1862, the Overlanders passed through Yellowhead Pass in search of great fortune in the British Columbia goldfields, and many of these 115 documented adventurers suffered great adversities while in Jasper. By 1884, Jasper House was abandoned as fur trading declined, as did the city's appeal to travelers and explorers for awhile.

In 1897, A.E. Snyder, an officer of the North West Mounted Police made the first patrol to Jasper from Edmonton, and a year later the Colombia Icefield was discovered. This, of course, fueled great interests in Jasper's wonders again, and eventually, the Dominion Government set aside 13 thousand square kilometers of land established as Jasper Forest Park in 1907. One year later, Mary Schaffer from Pennsylvania followed some Stoney Indian trails and wandered across Jasper's Maligne Lake, a treasure of the park today.

By 1910, payments were being given to settlers of the Athabasca Valley in an effort to force them to move to other lands to make way for the park and its expansion. Only Lewis Swift was permitted to stay. Over the years, railway expansions went full force, new structures and lodges were built, and the present Jasper Information Centre was constructed. Jasper National Park in Alberta was made official in 1930.

Recent developments near Jasper include the opening of the Yellowhead Inter-Provincial Highway now known as the Trans-Canada Yellowhead Highway 16. Yellowhead Pass is designated as an official national historic site, and in 1984 Jasper was declared a UNESCO site. Learn more about the rich heritage and history of Jasper National Park at the Jasper-Yellowhead Museum & Archives on Pyramid Lake Road.

As one of Canada's finest four-season destination parks, there's constantly something to do and someplace to investigate here. Activity after activity beckons visitors in all directions as the adventures are virtually limitless at Jasper regardless of the time of year. One little perk many people miss here are the remarkable hot springs in Jasper, and these are particularly nice after a long day of sightseeing.

Hiking and backcountry treks are certainly the park's most popular activities, and there are more than 1200 kilometers of trails traversing alpine meadows, jagged peaks, and heading to the various lakes and waterfalls. The rugged scenery is also breathtaking as hikers may be remarking in the serenity of Mount Edith Cavell's majesty one moment and then find themselves just steps away from a wandering elk or coyote. Spring and summer are simply spectacular with temperate climates and a great waterfall show as the glaciers and snowfalls melt.

The Columbia Icefields are the world's only ice fields that are accessible via roadway, and many visitors choose to take advantage of that with guided tours across the Athabasca glacier. Wildlife viewing along the Columbia Icefields is world-recognized for its superiority, and some of the rarest animals in North America are frequently spotted here including grizzlies, moose, caribou, and wolves.

Enjoy fine amenities, remarkable dining onsite, a fabulous golf course, and waterfront access at one of the premier lodges in Jasper National Park at Fairmont Jasper Park Lodge. This notable lodge in Jasper offers the most luxurious accommodations one could ask for in the midst of such glorious wilderness. Those seeking to stay in a rustic and historic lodge in Jasper should consider the Athabasca Hotel in downtown.

Another fine lodging near Jasper National Park lies between the Banff National Park and Jasper border and is an hour drive from Jasper Proper. The fabulous chalets at the Glacier View Inn make for a memorable stay along the Icefield Parkway and are ideal for those seeking to visit both National Parks.

Jasper National Park in Alberta is the largest national park in the Canadian Rockies. Here you will find abundance in wildlife, and scenic beauty. Read on to see how this national treasure can tempt you into the wild. ...
Read More

Located in between fascinating and magni...