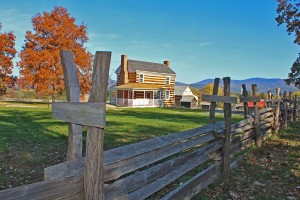 Shenandoah straddles part of the Appalachian province known as the Blue Ridge, aptly named for the same atmospheric conditions that dubbed the Smokies. Shenandoah launches many small streams down its sides, replete with countless cascades and waterfalls. Visitors are treated to broad vistas from Skyline Drive - from Piedmont to the east and the Valley to the west – all the way from one end of the park in Front Royal 105 miles down to its southernmost reaches in Waynesboro.

Hike more than 100 miles of the Appalachian Trail, explore Civil War History, and experience the vast wildlife that is encompassed within Shenandoah – all less than 100 miles from Washington DC.

Early History of Shenandoah and Its Creation

Explorer John Lederer encountered the Monocan and Manahoac tribes living in the Blue Ridge region in 1669 and described them as "peaceful and intelligent people who worshiped one god and followed a calendar." Human tenancy here is similar to that of the Great Smoky Mountains. Natives lived on and hunted these lands for thousands of years before white settlements pushed them aside, turning themselves into the new natives of the Blue Ridge.

The earliest European settlers arrived in the 1750s and built homesteads, planted crops and orchards, started businesses, and the lands were logged and mined for minerals. Much like the Native's before them, these settlers found themselves pushed aside in the interest of developing Shenandoah National Park and were predominantly removed through the process of eminent domain by the Commonwealth of Virginia in between 1926 and the park's official establishment in 1935.

The Blue Ridge Mountains region was one of the most essential tools used by both Confederate and Union essentials. Serving as an ideal natural barrier to conceal troop movements, from 1861-1865 the Shenandoah Valley saw heavy military action as well as many lives lost. Most notably, six battle sites within the park comprise the bulk of Stonewall Jackson's Shenandoah Valley Campaign locales. These are observable from marked points along Skyline Drive, and a guided tour is arguably the best way to learn about the Civil War's rich history amid the park's boundaries.

Flora and Fauna – When to Visit Shenandoah's Seasonal Wonders

Shenandoah engages the senses year round, with the Appalachian spring bringing forth heavenly-scented flowering dogwoods and other treasures within the depth's of the hardwood forest while the green of leafing trees move up the mountain slopes at the astonishing rate of 100 vertical feet each day! Autumn is simply a stunning showcase of reds, oranges, golds – everything one envisions amid a perfect fall landscape. Mid-October is when the maples and others reach their peak in color, and the views from Big Meadows – the largest open area within the park – offers panoramic vistas each season.

More than 1600 species of vascular plants, flowering trees, and shrubs grow amid these primarily deciduous forests filled with more than 100 species of trees. Fauna includes black bears, white-tailed deeper, bobcats, skunks, and over two hundred bird species. The park's headquarters is located in Luray, where visitors can sign up for ranger-led tours and hikes throughout the park.

Skyline Drive – The best-known drive in the park, Skyline Drive runs along the ridge, offering the finest views in the park. Many hiking trailheads, scenic overlooks, and military battle sites are easily accessible from the road, which is a National Historic Landmark and is designated a National Scenic Byway.

Old Rag Mountain – Both the most challenging and popular hiking trail within Shenandoah, expect to do some rock scrambling and exert some effort before being rewarded with the most breathtaking vistas in all of Virginia.

Limberlost Trail – Around milepost 43 is a trail accessible to all that is truly spectacular in Spring when the mountain laurel blooms. Designed to meet ADA standards and is being upgraded to meet newer standards, Limberlost Trail is a 1.3-mile circuit hike with frequent resting points and groomed trails.

Stony Man Trail – One of the most scenic trails in Shenandoah National Park, hikers often come here to watch the glorious sunsets from the overlook atop a stunning cliff at the end of Stony Man Trail.

Dark Hollow Falls Trail – Near the Byrd Visitor's Center, this steep and tricky trail leads to a 70-foot cascading waterfall and continues across a stream before connecting with Rose River road. Lots of wildlife, including black bears, are sighted along Dark Hollow Falls Trail. Many significant waterfalls grace the park, and the various Visitor Centers will offer comprehensive maps with essential details for all the trails.

Lodges in Shenandoah National Park include the historic Skyland Resort, which was established back in 1888. Sitting at over 3600 feet, Skyland Resort offers the finest views of the Valley, is proximal to numerous hiking trails, and offers popular outdoor activities. Big Meadows Lodge is an example of premier Shenandoah National Park lodging near the Harry F. Byrd Visitor Center. Lewis Mountain Cabins offer an affordable rustic experience within fully furnished, cozy cabins situated amidst the natural beauty of the park.

Shenandoah National Park Lodging Outside the Park There are ample Shenandoah National Park lodges outside the boundaries that provide convenient access to Skyline Drive the most popular park attractions and features. Those seeking lodging near Staunton, VA will relish in the full-service and comfortable quarters at the Stonewall Jackson Hotel. A superior accommodation north of Shenandoah is the Holiday Inn Front Royal while those looking for something more rustic yet luxurious should consider the magnificent Shenandoah River Cabins.

All rooms at Skyland, including cabins, ...

If you're looking for family accommodati...

Luxury accommodations with all the ameni...