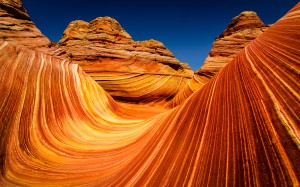 About Grand Staircase-Escalante National Monument and its history

Even avid travelers who are aware of Zion National Park in Utah may not recognize this name, but they will surely appreciate the challenge. We're talking about the Grand Staircase-Escalante National Monument. Those concerned about heights may want to think twice as these steps rise 5,500 feet from the base of the Grand Canyon to the perimeter of a jagged plateau called Paunsaugunt in Bryce Canyon, Utah. This monolithic chunk of public land pretty much takes up the bulk of the Southwestern Utah desert and certainly provides some of the most remarkable scenery in the country.

In the year 1870, a geologist named Clarence Dutton described the Grand Staircase as the largest "stairway he had ever come across that ascended out of the bottom of the Grand Canyon north with the cliff edge of each rock layer forming giant steps". What is so unique about the "steps" are the sheer vastness and magical essence of the White Cliffs, Gray Cliffs, Pink Cliffs, and Vermilion Cliffs.

The Grand Staircase-Escalante National Monument earned its status back in 1996, and covers roughly 1.9 million acres and pretty much dominates any map of the southern section of the state of Utah. In essence, it serves as a centerpiece for the Grand Circle of National Parks. Prepare to see everything from Navajo sandstone cliffs to glorious narrow slot canyons, arches, monoliths to winding rivers, high desert, dinosaur tracks, and fossils…you'll find it all at the Grand Staircase Escalante National Monument.

Don't get intimidated by the size and the enormous challenges of the GSE, as it is called by locals. The beautiful Willis Creek Slot Canyon and a few others offer easy and fun hikes that are safe and fun for explorers of all ages, and some trails are moderately rated. However, the rock climbing and hiking available at the Grand Staircase Escalante is also not to be underestimated, and it offers solid treks for the most dedicated enthusiasts. Canyons of the Escalate is a premier example of world-class competition for outdoor gearheads. The entire canyons area is like a "maze" of sandstone cliffs, canyons, and plateaus, surrounded by higher areas of the Colorado Plateau making the exploration possibilities limitless.

Driving Scenic Byway 12 is a great way to get started before heading to Upper and Lower Calf Creek Falls Trail. Another great driving tour just off the byway follows the Mormon pioneer's route and is called Hole-in-the-Rock. Along Hole-in-the-Rock Road the views of Straight Cliffs and the Kaiparowits Plateau are simply stunning. This route allows access to many other popular overlooks and sites including Chimney Rock, Dance Hall Rock, and Devil's Garden. This journey is about eight hours roundtrip and requires a 4-wheel drive, high clearance vehicle. Spooky Slot Canyon and Peekaboo Gulch are other notable side trips to consider while visiting the GSE.

The overall beauty of the Grand Staircase-Escalante National Monument is without a doubt one of the most beautiful places on this earth, but it can quickly become one of the most dangerous when warnings and park regulations aren't followed, so keep ranger advice and signs in mind at all times.

Grand Staircase-Escalante National Monument is a dramatic, multi-hued landscape that is rich in natural and human history. ...
Read More

Learn about the three main regions of the monument: the Grand Staircase-Escalante, the Canyons of the Escalante, and Kaiparowits Plateau. ...
Read More

Boulder Mountain Lodge is an oasis among...

Escalante Yurts is situated on 20 privat...