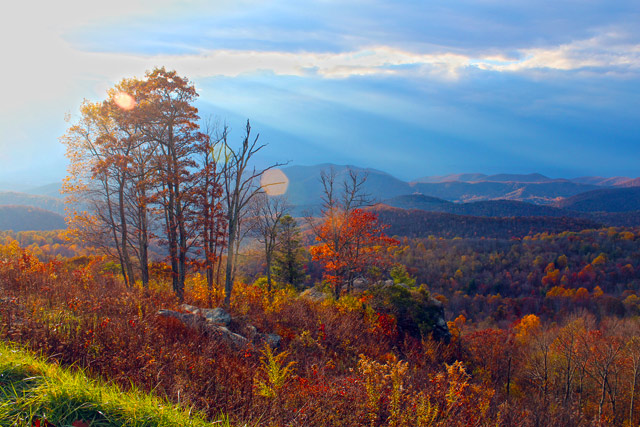 Mention the phrase "Fall Colors in America's National Parks" and chances are good, that the first image that will come to mind is the stunning Blue-Ridge Parkway and Shenandoah National Park. There is a good reason for this. Shenandoah National Park is home to some of the nations most beautiful hardwood forests. The 105 mile-long Skyline Drive, (which makes up the most northern part of the Blue Ridge Parkway), is your theater to some of the most resplendent fall color displays in the entire United States. This gorgeous, densely forested national park reliably delivers a kaleidoscope of red, yellow, purple, orange and gold year after year during mid-October through mid-November.

While colors typically hit their peak inside the park during mid to late October, it can often be difficult to predict exactly when the best colors will be on display due to the parks multivariate elevations and the diversity of climate from the southern end of the park to its northern end.

The Skyline Drive can be very busy during the fall season, especially during the day, but if you don't mind the extra traffic, a drive along Skyline Drive during the mid-day hours can be spectacular, as the sunshine illuminates the vivid leaves in the forest canopy that covers both sides of the parkway.

Be sure to plan your trip well in advance, and make your reservations at Big Meadows Lodge or the Skyland inside the park for the ultimate fall-time experience inside the park. Both of these lodging properties are situated among thick hardwood forests and provide both lodge rooms and cabin accommodations. The nostalgia of the historic lodges and the smell of wood burning in the fireplace really adds to the Shenandoah autumn experience!

The Appalachian Trail is a public footpath across 2,160 miles of Appalachian Mountain ridgelines from Maine to Georgia. Here you will find information about the A.T. from Shenandoah National Park. ...
Read More

All rooms at Skyland, including cabins, ...

If you're looking for family accommodati...

Luxury accommodations with all the ameni...