Capitol Reef National Park is located in south-central Utah, just 3 hours from Zion National Park and 2 and a half short hours from Bryce Canyon National Park. This beautiful area is a diamond in the rough and a hiker's dream. Here you'll find endless cliffs, canyons, bridges, and domes to explore as well as beautiful, historic orchards and some of the best night skies to be seen. This hidden treasure was recently designated as an International Dark Sky Park and night sky conditions are monitored by park staff throughout the year. Read more...

The most scenic area of the park is the Waterpocket Fold near the Fremont River known as Capitol Reef. This geologic wrinkle in the earth features white domes of Navajo Sandstone resembling our nation's domed capitol buildings and rocky cliffs that resemble a coral reef, thus giving the park its name: Capitol Reef National Park. This 100-mile long warp in the Earth's crust was formed nearly 50 to 70 million years ago and is an awe-inspiring sight to see. Other popular areas of the park include the historic Fruita Area with views accessible from a paved scenic drive, hiking trails and orchards and the Cathedral Valley offering more of a backcountry experience.

Within the park, you'll find activities such as hiking, backpacking, rock climbing, auto touring, bike riding and horseback riding as well as ranger talks and orchard picking. For the kiddos, visit the Ripple Rock Nature Center where kids can play pioneer games, identify fossils and more or enroll them in the park's free Junior Ranger and Junior Geologist programs.

The Capitol Reef Resort is a 58-acre paradise in Torrey, Utah, located at the gateway to Capitol Reef National Park. The abundance of lodging options will surely satisfy the desires of every adventurer from luxurious guestrooms and cabins to authentic teepees and Conestoga wagons. The Capitol Reef Resort offers an assortment of tours into Capitol Reef National Park that are sure to please. Upon returning to the resort, the amenities abound for the comfort of guests including an on-site restaurant, seasonally heated pool, year-round hot tub, WiFi access, business services, and gift shop. 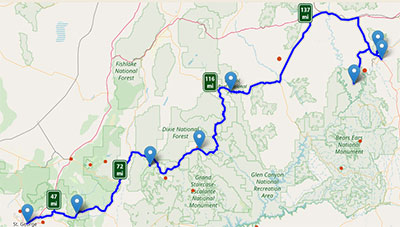