Redwood National Park: The History and the Beauty! 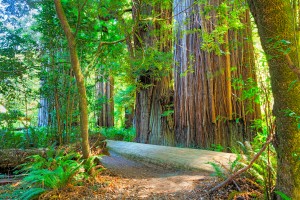 The coast of Redwood National Park preserves 37 miles of northern California pristine coastal lands, where the redwoods are held back from the water's edge by their vulnerability to salt, which is carried on shore by spray and wind. These trees are believed to live no further inland from the sea than the fog reaches – about 30 miles. The dense fogs of summer are vital to keeping these forests saturated, and the largest trees that pass 300 feet in height are located along streams and well-watered lowlands. However, it's hard to be disappointed by 'the small ones' as these gentle giants are imposing at any size.

Many Native American's still reside in the park region to this day; however, their ancestors grazed and hunted on these lands as long as 3000 years ago according to archeological evidence discovered in Redwoods. The Tolowa, Yurok, Chilula, Wiyot, and Karok all have strong historical ties to the region, but the Yurok apparently outnumbered other tribes. Evidence shows that the Yurok had around 55 villages with more than 2500 inhabitants at one point. Exceptional builders, these natives used the Redwoods to construct surprisingly sturdy homes using innovative strapping and support beam techniques.

It's thought that around 1828 that Jedediah Smith was the first European explorer to thoroughly investigate the lands of Redwood. However, once gold was discovered along the Trinity River, a second gold rush swept the region in 1850. Conflicts with the natives and gold chasers ensued leading to massacres and forcible removal of many natives. By 1900 less than a third of the Yurok remained, and most other tribes had died off or assimilated into others. Conservation efforts didn't begin until 1910, but it would be decades before the Redwoods received a reprieve from extensive logging that destroyed more than half of these majestic trees.

Hiking, biking, fishing, and coastal activities flourish, and the 40-60 degree year-round climate leaves visitors with a world of options for activities in Redwood National Park. Anglers revel in the Smith River's rainbow and cutthroat trout action in late summer while the salmon and steelhead challenge them through the winter months. Driving tours through the Tall Trees Grove are highly popular. However, the park issues limited permits daily for access, so arrive early. More than 200 miles of wilderness and coastal hiking trails take trekkers from sea level to elevations up to 3000 feet, and some trails and bridges close seasonally.

Prairie Creek Redwoods State Park, Del Norte Coast State Park, and the Jedediah Smith Redwoods State Park seamlessly intermingle with the boundaries of Redwoods National Park. However, they each offer their own special appeal that beckons visitors to cross into their borders for sightseeing and hiking excursions. These side trips are well worth making and offer additional opportunities to encounter more of the region's wildlife and spectacular scenic overlooks. Many Ranger-Led Programs and Jr. Ranger Programs embark upon woodland hiking trips to these special places, and most are free to park visitors.

One of the most sought after creatures visitors wish to encounter here is the mighty Roosevelt elk, which can be viewed if one hikes quietly and gracefully. Some of the most reputable spots for catching a glimpse of these grandiose giants are aptly named Elk Prairie and Elk Meadow, but Bald Hills Road and Gold Bluffs Beach also afford great viewing opportunities.

There are more than 70 miles of coastal trails in Redwood National Park. Hike the magnificent Klamath Section where a moderate, 5-mile trail allows trekkers to access Wilson Creek, False Klamath Cove, Hidden Beach's tide pools, and the Klamath River Overlook – a whale watching and sea lion paradise. The Crescent Beach Section is kid-friendly and leads to pristine beaches ideal for combing for shells and viewing the wild elk that graze the prairies adjacent the beach. The Gold Bluffs Beach hike follows a meandering stream through a hidden canyon with 30-foot walls covered by several species of ferns. Follow steps up to James Irvine Trail to a prairie that was once a small mining town above Fern Canyon.

While traversing the park, keep an eye out for some famous Hollywood scenery such as the Endor scenes from the early Star Wars films that took place in the Tall Trees Redwood Grove. Parts of Jurassic Park: The Lost World and the film Outbreak were also filmed here, as was Dinosaurs Alive! an IMAX 3-D film.

Favorite lodges in Redwood National Park include the cozy Emerald Forest Cabins, where the spirit of the North Coast is seemingly captured amid these comfortably furnished units. Other Redwood National Park lodges to consider are the Redwood Parks Lodge Company & Elk Meadow Cabins. These premier accommodations offer ideal access to the best sights of the park, and these luxury cabins offer superior comfort after a day of park exploration.

Trinidad is an eccentric and bustling ocean village in the heart of old growth redwoods overlooking the Pacific Ocean below. ...
Read More

Arcata has similar biological attributes to Trinidad, yet the biggest draw to Arcata is Humboldt State University. ...
Read More

For those who want the luxury of a fully...

Don't miss out on these great pet-friend...