The Isle Royale archipelago in northern Lake Superior has been important to humans for thousands of years. The veins 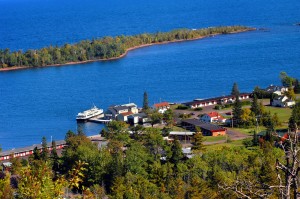 of copper in the island's weathered, glaciated rock attracted Native American and later, Euro-American miners. The Indian name of the island, "Minong," has been translated as "a good place to get copper," but could easily mean "a good place to be" for those who embrace any occasion to experience this world-famous but lightly visited Biosphere Reserve today.

Aboriginal copper mining pits date back to 4500 years ago, and the metal hammered from the pits was traded as far away as New York. The 45-mile long and 9-mile wide island of Isle Royale and its 400 smaller segments were first designated as a wilderness preserve and then established as a national park in 1940.

In many national parks, the original intentions of the founders are often complicated and complemented by later events. Such is the case of the wilderness of Isle Royale National park. Its remoteness and robust forest community, its long, varied cultural heritage, and its lakeshore beauty were all perfect reasons for establishing the national park, but more was to come.

About a decade after its establishment, persistent rumors of wolves were finally confirmed. Apparently, one winter day in 1948, a wolf pack of unknown size crossed the ice of Lake Superior from the Canadian shore, only 15 miles distant and made themselves at home on the isles. What a home they found, along with a few others critters like beavers, foxes, snowshoe hares, rodents, and even some moose had found their way across in the previous century somehow.

The wolves and the moose were seemingly made for each other, and soon scientists were taking notice of the drama being played out here. For half a century now, wolf and moose populations have been on a fascinating roller-coaster ride of growth and decline, boom and bust. This island has become one of the most significant study sites for understanding predator-prey interactions. In the process, the wolves of Isle Royale have become, like the Serengeti lions, the Chinese pandas, and the Yellowstone bears, among the most famous wild animals in the world.

Isle Royale and its smaller isles and islets are more than 15 miles from the nearest point on the mainland, and seaplane or boating in is the only way to access the island. Be certain to allow for extra time to arrive and depart the island and take this into account when booking reservations and making travel plans.

The center of the hiking action is mostly around the Greenstone Ridge area, which sits high in the center of Isle Royale proper. The longest hiking trails in the park include the Greenstone Ridge Trail, a 40-mile trek that traverses the entire island end to end. This is typically taken on in four or five-day hike, and a boat shuttle takes hikers back to their starting points each day.

Those looking to get off the lands and enjoy the majestic sites on the islets will find miles of kayaking and canoeing routes that take visitors to the finest coastal pays, portages, and inland lake settings. Again, using the ferryboat that circles the island is very helpful for those exploring by foot, canoe, or sea kayak. Biking is another excellent way to see the main island, and bikes travel well on the ferry, too.

There are no truly 'busy' areas of Isle Royale National Park, but there are two primary developed areas where services and amenities including Isle Royale lodging can be secured: Windigo at the southwestern area of the isle, and Rock Harbor on the northeast end where the Michigan ferries dock. Visitors will find food and grocery options limited, but what is here is generally well-liked.

There's only one option for those seeking Isle Royale lodging, but these folks offer a variety of accommodations that will suit any traveler's needs. The Rock Harbor Lodge sits on the northern shore of the isle. Cottages and lodge rooms are available, and each of these Isle Royale National Park lodging options includes a half day's use of a canoe or kayak.

Everything one needs is in the Rock Harbor Cottages, which have a fully equipped kitchenette, linens, electric heat, and studio living rooms. Lodge rooms at Rock Harbor Lodge offer stunning views of Lake Superior and boast a private bath. More than just a room, the Rock Harbor Lodge is proximal to Tobin Harbor and the Rock Harbor Marina, and they also offer to arrange guided sightseeing tours, fishing excursions and arrange for boat rentals for guests.

Isle Royale is more than 15 miles from the nearest point on the mainland, and seaplane or boating in is the only way to access the island. ...
Read More