Waterton National Park: A Treasure of Natural Abundance Throughout History 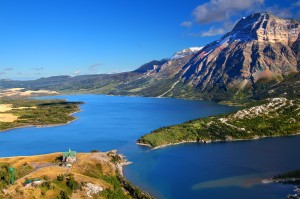 The southwest corner of Alberta, Canada is home to Waterton Lakes National Park, which conveniently borders Glacier National Park in Montana. As a portion of the Crown of the Continent ecosystem, Waterton features numerous diverse biological, physical, and cultural resources including Great Plains prairie plants, Rocky Mountain northern foliage, and coastal dwellers. Many of the park's flora and fauna are rare and/or designated as endangered species.

Over 1000 vascular plants, 250 bird species, 24 types of fish, and 60 animal species including large mammals like a wolf, cougar, grizzly bears, and black bears reside here. Arguably, Waterton Lakes National Park is a nature lover and outdoor enthusiast's recreational paradise, and more than 50 percent of Alberta's plant species are readily observable. This likely contributed to Waterton Lakes' declaration as a UNESCO World Heritage Site, and the park is currently part of the Man and the Biosphere Programme – the first Canadian National Park to achieve such status.

Nomadic tribes including the Kutenai and the Blackfoot hunted and gathered along the landscapes of Waterton Lakes for thousands of years in relative harmony – until the introduction of guns and horses in the 1700s changed not only their relationships with the lands but their relationships with other. Harmony turned into conflict quickly as each native tribe sought to expand their claim on these lands; however, only the Blackfoot acquired rifles initially giving them the ability to force the Kutenai west of the Continental Divide permanently.

These skirmishes were long gone by the arrival of the first European expeditions in the mid-1800s. These journeys would ultimately lead to the first steps in protecting Waterton as a national treasure. In 1895, Waterton Lakes National Park became Canada's fourth. It wasn't long before John George Brown, the park's first official, worked diligently alongside American ranger Henry Reynolds to propose the creation of an International Peace Park combining Waterton Lakes with Montana's Glacier Park. This dream took decades to realize, and was cemented in 1932 at the historic Prince of Wales Hotel and is intended to symbolize the bonds of friendship and peace between Canada and the US.

Activities and attractions in Waterton NP will vary depending on the season. Winter activities in Waterton include cross-country skiing and snowshoeing, while summer delights include floating, swimming, bird watching, and wildflower hunting. Regardless of the season, Waterton delights year round as visitors traverse billion-year-old sedimentary rocks of colorful argillite when not taking advantage of the serene blue waters of the lakes.

One need not look far to find a host of things to do at Waterton Lakes. Boating and cruising across the lakes to various sights, trails, and attractions are some of the most well-liked activities in Waterton National Park. Visitors may board the historic M.V International to cruise to the Waterton Glacier International Peace Park, or head along Upper Waterton Lake all the way to Goat Haunt, Montana. Water shuttles operate daily heading to Crypt Landing, where one of the park's finest hiking trails begins. Canoeing is also widely popular in the summertime, particularly across the lovely Cameron Lake at sunrise and sunset.

Emerald Bay Shipwreck is rarely without curious scuba divers dipping and surfacing as they explore the hundred-year-old remains of Gertrude. This sunken sternwheeler teems with fascinating underwater creatures that beckon one to take a dip; however, the sights of Emerald Bay are simply stunning. Make a stop at Emerald Bay even if viewing the wreckage beneath the surface isn't on the agenda.

Hiking trails in Waterton National Park abound ranging from easy forest walks to intensive treks. One of the most popular short, but strenuous hikes in Waterton is known as The Bears Hump. Begin at the Visitor Resource Centre and work up to the top to enjoy views of the entire Waterton Valley and the tallest summit in the Waterton-Glacier International Peace Park, Mount Cleveland. Here, one can witness the luminescent glistening of the Lower and Middle Waterton Lakes and view the rolling prairies where they meet the mounts. Other great hikes include the Alderson-Carthew trail and forest hikes to soak in the sights at Blakiston Falls.

Arguably the best scenic drive in Waterton, The Red Rock Parkway offers a comprehensive journey and interpretive history of the region. Countless pullouts educate and inform as travelers work their way to their rewarding views of the Red Rock Canyon.

Other notable lodges at Waterton Lakes National Park include the waterfront Bayshore Inn and the all-suite Waterton Lakes Resort Lodge. The Bayshore Inn boasts luxury spa services, luxury accommodations, and guests enjoy first-rate service and amenities throughout their stay. The Waterton Lakes Lodge Resort is one of the newest lodges in Waterton National Park and lies at the heart of Mountain Village, making it convenient to all the best features within the park. Travelers seeking a traditional mountain lodge in Waterton will relish in the atmosphere of the rustic, yet cozy quarters of the Crandell Mountain Lodge Inn.

Waterton National Park: A Treasure of Natural Abundance Throughout History

A touch of the old world marks the disti...

The Waterton Glacier Suites is the ideal...