A history of Shasta Lake and Shasta Dam 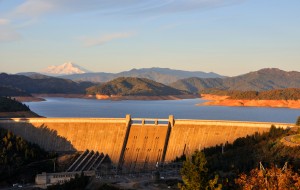 Shasta Lake is California's largest manufactured lake or reservoir. Located in northern California, Shasta Lake was created along with the construction of the Shasta Dam, which was built across the Sacramento River in the 1930s and 1940s in what was an innovative and effective solution to the citizen's problems.

In the 1800s, the larger area surrounding what is now Shasta Lake, California's Central Valley was popular with people moving to the state from the Eastern United States. The valley had fertile soil and water from the Sacramento River, making it ideal for farming.

Unfortunately, the Central Valley was also susceptible to droughts, flooding, and other water supply problems. These same issues likely caused the primitive native settlers over the past 10,000 years or so to move on as well – greener pastures, so to speak. However, these pioneers wanted to stay and began discussing several possible solutions to their water shortage problems.

In 1919, the United States Geological Survey suggested damming the Sacramento River. Both the State of California and the federal government came up with plans for a dam. The federal plan was turned down, but the state plan was approved, with a catch: California taxpayers would be responsible for the cost, an estimated $550 million. However, the state ran into problems with funding, which wasn't helped by the Great Depression of the 1930s. By the mid-1930s, however, the federal government agreed to take over the project and construct the dam.

The Shasta Dam was originally called the Kennett Dam, after the name of a town that would be flooded by the rising waters of Shasta Lake. Work on the dam began in 1937, and many of the same people who had worked on the construction of the Hoover Dam would be called back in to construct the Shasta Dam. As the United States entered World War II at the end of 1941, many of the men building the dam would leave to enlist in the military. Work on the Shasta Dam slowed down, but women signed up to work on the dam and it was completed by early 1945. Think Rosie the Riveter, when thinking of the history of Shasta Lake!

Once complete, the Shasta Dam was the second highest dam in the world, after the Hoover Dam. It provides electrical power, flood control, and water storage as Shasta Lake. Today, Shasta Lake and the surrounding Shasta–Trinity National Forest is one of California's top recreational destinations. The area has a few million acres of wilderness to explore and enjoy. Hundreds of miles of groomed trails and thousands of miles of pristine rivers and streams traverse numerous mountains and lakes.

Activities and Attractions at Shasta Lake

Hitting the trails is a good way to take in the spectacular scenery of Shasta Lake. Hiking, biking, driving, even horseback riding offer sightseers and nature watchers an excellent way to see the area's beautiful flora and fauna up close. One of the top lake viewing spots here is at Sundial Bridge on Turtle Bay. This footbridge traverses the Sacramento River and joins the nationally designated trail system in Redding with the Turtle Bay Exploration Park and the McConnell Arboretum.

Mountain climbers will be in for a treat at Shasta Lake. The area is home to several mountain ranges and features Mount Shasta, a dormant volcano with an elevation of 14,179 feet. The mountains are enjoyable in the winter, too, as downhill skiing, snowboarding, and snowmobile riding are allowed in the area. Shasta Lake Cavern lets visitors discover the underground wonders of Shasta, and is a favorite hike.

Fishing and hunting at Shasta Lake are fantastic. Anglers will find several species of trout and salmon in the many rivers, lakes, streams, and ponds in the area, as well as smallmouth bass, catfish and crappie.

Those who prefer to shoot wildlife with a camera, as well as those who just like to take in the magnificent views, will find plenty to see. Big game such as black bears, deer, elk, and antelope can be found here, as well as fowl including quail and pheasant.
In addition to the large game, the Shasta Lake area is home to various wildcats including mountain lions and bobcats. Coyotes, foxes, raccoons, rabbits, and otters are also common. Plant life is abundant, with various tree and wildflower species found throughout.

The United States Bureau of Reclamation, the federal agency that built the dam, offers guided tours throughout the year. The tours take two to three hours and include an elevator trip to the base of the dam as well as a view of the dam's inner workings. These tours are available 5 days per week in summer.

Boaters and water sports enthusiasts will love Shasta Lake, which is known informally as the "houseboat capital of the world". Boating, canoeing, swimming, whitewater rafting, and water skiing are just some of the activities that can be enjoyed on the lake and the neighboring areas of Lake Shasta.

Shasta Lake lodging is easy to find, but reservations should be made early during busy warmer months. Those looking for private cabins at Lake Shasta will love the Tsasdi Cabins. Fully equipped with kitchens, private decks, and a panoramic view of the lake, Tsadi Cabins also boasts private docks for boating enthusiasts.

Those looking for Shasta Lake Lodges in or near Redding can take respite at the Best Western Hilltop Inn. Close to Lake Shasta Caverns and the Sundial Bridge, guests find modern conveniences with amenable lodging rates at the Best Western Hilltop Inn. Another wonderful lodging at Lake Shasta is the La Quinta Inn & Suites, name travelers have counted on for superior quarters for decades.

Shasta Lake is enjoyed year-round by fishermen, water skiers, house-boaters, or just those wishing to spend a relaxing weekend by the lake. ...
Read More

A history of Shasta Lake and Shasta Dam

Shasta Lake was created along with the construction of the Shasta Dam, which was built across the Sacramento River in the 1930s and 1940s. ...
Read More