North Cascades: A History of Peace and Prosperity That Still Lives Here Today! 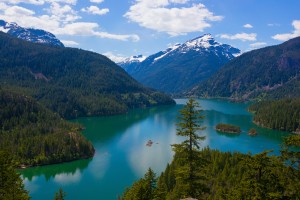 The bounty of moisture provided by the Pacific Ocean enables the North Cascades to support glaciers when many other ranges are losing theirs. A third of all glaciers in the lower 48 states are found within the park and the attached Lake Chelan and Ross Lake National Recreation Areas. Besides their work of sculpting the mountains peaks including Mount Triumph, Mount Shuksan, and Cutthroat Peak, glaciers play a key role in native plant and animal communities. Roughly a quarter of the water in park streams comes from glaciers, and there are 500 or so water zones at the foothills of these peaks.

About 8400 years ago, the people of the North Cascades started leaving us inadvertent messages about themselves. The oldest message that archaeologists have found was a quarry pit along the Skagit River, where people once extracted chunks of chert, a hard sedimentary rock suitable for making sharp edges and points. We don't know if that site was their first, but they seem never to have left since. For more than 8000 years, people made their homes in these valleys and wandered far into the high country during the summers. Known early peoples of the North Cascades include the Upper Skagit, Chilliwack, Nlaka'pamux and the Chelan.

They came for many reasons that can be appreciated even today. There were tremendous salmon runs with the Skagit's salmon coming into the park complex as far as Newhalem, a word derived from a Native American word meaning 'goat snare.' Goats were important for meat and for the exceptionally warm wools, which was widely traded.

Early park hunters used obsidian brought by trade all the way from Wyoming. The high habitats of goats were thoroughly familiar to these early hikers, who knew all the passes, the best berry patches, and the places where the elk, bears, marmots, and other prey could easily be found. Today, visitors hike through this great roadless wilderness park and relish the feeling of remoteness – of distance from people, searching out the wonder and awe with a great feeling of discovery. Nevertheless, the thrill should only be heightened knowing that one is following along a long line of hunters on these trails.

North Cascades National Park is broken up into a North Unit and a South Unit that is separated by the Ross Lake National Recreational Area and tipped by the Lake Chelan National Recreation Area. Each recreation area boasts a Visitor Center where many ranger-led tours and activities are available seasonally for travelers as well as boat, kayak, canoe, and other equipment rentals.

Winters here see the North Cascades accumulate a deep mantle of snow, but snowshoeing and cross-country skiers absolutely relish in the massive influx, particularly at Mount Baker. Moist Pacific storms sweep against the range, dumping four to seven hundred inches of snow across the park and its 300 active glaciers. Remember, the North Cascades are sometimes called the American Alps, and they extend for hundreds of miles and exert enormous authority on the typical weather and vegetation of the entire Pacific Northwest. The best time to visit North Cascades is typically June through September.

Hiking trails in North Cascades are not for the inexperienced hiker in general. Steep, rocky, and often covered with nearly impenetrable vegetation, the park's rugged terrain can be a challenge for even experienced hikers. However, easy walks such up Desolation Peak offer great views of Ross Lake and Hozomeen Mountain. Another easier trek runs from Cascade Pass Trail to Glory Mountain, and there are even a shuttle bus and a ferry there that will take visitors onto the Stehekin Valley.

Stehekin is a great place to pick up a mountain bike rental and hit the nearby trails, and many bikers hit the trails up to Mount Baker, which offers up some of the best backcountry sights to behold. Consider heading out onto the water by taking a four-hour boat trip up to Lake Chelan from Chelan to the community of Stehekin. In places, the bed of the deep, glacially carved lake lies more than 400 feet below sea level.

Despite the fact that much of the park is covered with trees of the evergreen variety, North Cascades Park offers many opportunities for amazing fall color. ...
Read More

When you plan a vacation to North Cascades National Park the first things you should do is make lodging reservations. Whenever you travel booking your room or rooms right away is advised so you can be sure to get the lodging you want and need. ...
Read More

Deep in the heart of the Cascade Mountai...