Mesa Verde National Park: Step Into The Remarkable History of Our Human Race 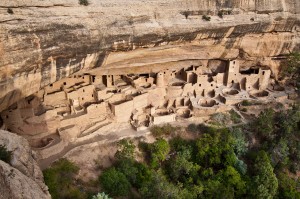 A combination of uplift and erosion has cut away the south-facing 2000-foot high cliffs of Mesa Verde National Park in a series of long, deep canyons. For centuries, precipitation percolated through sandstone layers and gathered in springs. The emerging water, assisted by freezing and thawing, gradually eroded alcoves, caves, and low-ceiling shelves out of the cliff face. In the 13th century, the alcoves were the site of some of the most extraordinary architectural achievements in the New World.

Beginning about 1500 years ago, people colonized the flat top of Mesa Verde and moved into some of the alcoves. What they called themselves is unknown, but our populations have long called them the Anasazi, yet today it is believed that Ancestral Puebloan is more accurate. The mysterious things these ancients built here only fuel this mystique. Around the 13th century, after about 700 years of farming and building on the mesa top, these people began a brief but spectacular period of construction in the cliff alcoves. Experts believe that the Pueblo may have moved from the Mesa top to stave off attacks by other tribes.

Within a generation's time, they abruptly abandoned the whole Mesa, likely to head to more hospitable regions after a two-decade drought along the mesa. In any event, the legacy of these "lost cities" and their builders have been a richly conjectural one. Since the late 1800s, several generations of researchers, natives, and other admirers of Mesa Verde have puzzled over the buildings and where they went.

It's interesting to explore Mesa Verde's cliff houses while keeping in mind that this was someone else's home! Those wanting to learn more about the rich history of Mesa Verde National Park, its ancient peoples, and the mysterious cliff dwellings won't want to miss the Chapin Mesa Museum, which presents an overview of what is known about the Ancestral Puebloans and exhibits fine examples of basketry and weaving.

Mesa Verde activities and tours are available all year round, and of course, the most popular endeavors are exploring the cliff houses.

Cliff Palace – The largest of Mesa Verde's cliff dwellings, Cliff Palace, is thought to be the largest in the world and involves a 100-foot vertical climb, but ladders and steps help visitors access the sights. Self and guided tours of Cliff Palace are available seasonally.

Balcony House – The most adventurous cliff dwelling tour in Mesa Verde National Park also happens to be one of the most challenging treks, as visitors will crawl, tunnel, and climb the open rock face into Balcony House.

Spruce Tree House – Tours from winter to early spring are available led by rangers only, and March to November tours are self-guided only. Make dramatic descents and ascents along the winding path to Spruce Tree House, the best-preserved exhibit of cliff dwellings in the park.

Long House – The park's most in-depth tour is of Long House, and reservations are recommended at least two days in advance for the ranger-led tour.

Lodging near Mesa Verde is available just outside the park entrance in Mancos, Colorado at the lovely and serene Willowtail Springs. Private lakefront cabins offer the ultimate respite away from it all! Centrally located to many attractions such as the Anasazi Heritage Center, the Ute Mountain Tribal Park, and a day trip away from the Durango/Silverton area and the San Juan Scenic Byway makes Willowtail Springs an easy choice for lodging near Mesa Verde National Park.

Mesa Verde hotels are a rare commodity at least those inside the park, but this lodging gem is one that is definatley worth a visit. . ...
Read More

Mesa Verde National Park: Step Into The Remarkable History of Our Human Race

Bring your family or friends to a place ...