Come visit the Pioneer Yosemite History Center at Wawona to learn all about the lives of Yosemite’s early settlers! The center is open year round, but the building interiors are only open for a limited time during the summer season. Here, guests can learn what what life was like for the early settlers of the area and see the historic buildings where they lived and worked! 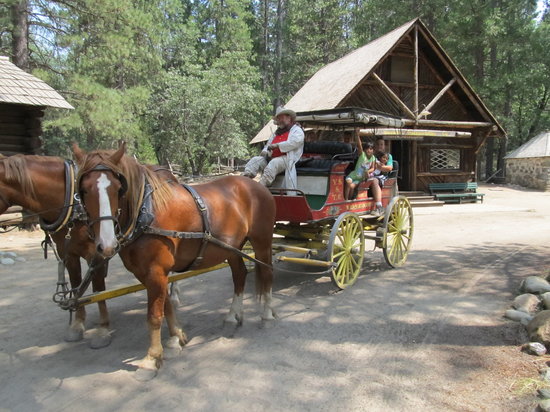 At the Pioneer Yosemite History Center at Wawona, you and your family can enjoy a quick stagecoach ride and travel as Yosemite’s pioneers did! Enjoy the sites of the history center as you’re pulled by 2 strong horses amongst the historic buildings and over the unique covered bridge. Horseback rides are also available.

Covered Bridge
When you visit Pioneer Yosemite History Center at Wawona, you can’t miss the old, covered bridge! You can travel by horseback or by foot. This covered bridge offers a smooth, even passage, across water and is built from timbers that still contain the original markings made by pioneer builders! Constructed in 1857, all traffic coming in and out of Yosemite Valley had to cross this very bridge.

Art of Thomas Hill at Wawona Visitor Center Yosemite has long been a source of inspiration for artist and photographers from around the world. In addition to the historic Artist’s Studio in Pioneer Yosemite History Center, visitors can also enjoy the Wawona Visitor Center at Hill's Studio. This center allows visitors to learn more about Thomas Hill’s contribution to the art of landscape painting and the important role art plays in protecting our national parks.

Summer Programs Join in on some fun summer programs at Camp Wawona. Located on 30 deeded acres of Yosemite’s gorgeous land, this kid’s summer camp is the perfect experience for them to spend some time outdoors creating memories they’ll cherish for years to come! The camp has been around since 1929 and offers a variety of hands-on experience that let children connect with their environment. 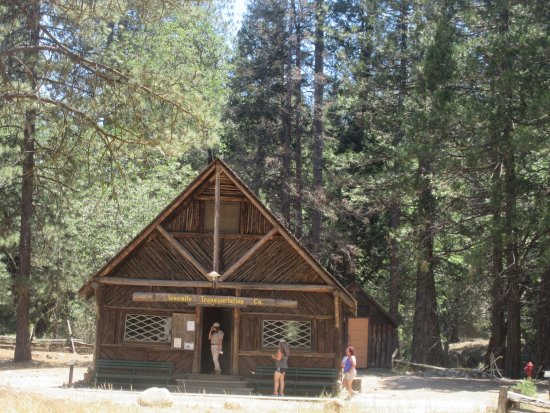 Many buildings in the Pioneer Yosemite History Center at Wawona were originally built in other areas of Yosemite National Park and were moved to the area due to their recognition in the National Register of Historic Places. All of the interiors have been authentically restored and much of the originally furniture is left inside.

Anderson Cabin This cabin was once owned by a man named George Anderson. He was a miner and blacksmith who worked as a guide during the 1800’s, providing exceptional tours all across Yosemite. Not only did he work in the area, he set records in Yosemite too! In 1875, Anderson became the first person to climb the Half Dome. Pay tribute to one of Yosemite’s influential settlers when you visit his historic cabin.

Blacksmith Shop Visitors to the Pioneer Yosemite History Center at Wawona can visit the old Blacksmith’s Shop where, during the summer, real blacksmiths sit offering live demonstrations and sharing information with the public. Blacksmith shops were once located all throughout Yosemite to assist with horseshoe and stage coach repair.

Hodgdon Homestead Cabin Stop by the Hodgdon Homestead Cabin for another taste of Yosemite history. This two-story log cabin has an inviting, shady porch out front and was originally located in Aspen Valley. This cabin once belonged to Tom and Lizzie Hodgdon who owned cattle that grazed in the valley all summer long. These pioneers were among those who opposed John Muir’s efforts to create Yosemite National Park, fearing it would detract from their rights as property owners. Their cabin was the only two story cabin in the area!

The Wells Fargo Office The Wells Fargo Office, or the Yosemite Transportation Company Office, was the structure that functioned as a horse and motor stage terminal as well as a telegraph and express office. The 1 1/2 story log building was made from strips of cedar bark laid out in a stylistic pattern. The building was added to the National Register of Historic Places on June 9, 1978 as it exemplifies a rare Rustic Style of architecture that was first developed in Yosemite!

Chris Jorgensen Studio
Chris Jorgensen Studio, also know as Artists Studio, is a one-room log cabin originally constructed in 1904. Jorgensen served as Assistant Director of the California School of Fine Arts, and studied and depicted local Native Americans, collecting native basketwork. The National Park Service acquired the Jorgensen Studio in 1919 and moved the building from Yosemite Valley in 1962 to the Pioneer History Center where the interior was authentically restored.

Wawona Cemetery Right across from museums, you’ll find the Wawona Cemetery. This is a peaceful place for a quick stop, and includes headstones form many early settlers in the 1800s. Some of the gravestones are labeled with nondescript names like “Pioneer Settler,” “Father of Yo Semite,” and “Frenchman.” The Wawona Cemetery is also the resting place of Galen Clark, the builder of covered bridge!

For an authentic, historical experience, visit Pioneer Yosemite History Center at Wawona. This is the perfect place to stop when visiting Yosemite National Park. With something for the whole family to enjoy, this center offers a fun educational afternoon for those who want a little taste of pioneer history.