In the early days of planet earth's life, there was a great sea where Glacier National Park, MT is today. It is now referred to as the Belton Sea. It was full of six different species of blue-green algae over the expansive time period of this inland sea. These tiny lifeforms are responsible for building our oxygenated atmosphere along with early lichens. The fossils of these tiny lifeforms and the earth surrounding the fossils can tell us a lot about the events and environment during that time before the gorgeous and rugged mountains of Glacier National Park were fully formed. These ancient layers and formations were not just laying on the surface to be found in pristine conditions. These layers were thrust to the surface again, hundreds of millions of years later after being protected deep within the earth. The layers were discovered in a rarely pristine condition only mildly effected by the elements. We can thank the Lewis Overthrust for that boost. A great example of the Lewis Overthrust is Chief Mountain in Glacier National Park, MT. Tall and isolated, the elements of time have stripped away the surrounding earth above what is now Chief Mountain and around it, to reveal this extremely old and extremely special phenomenon. 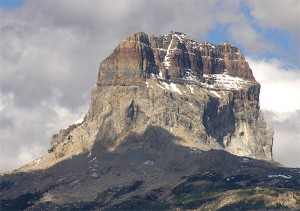 So as the tectonic plates of earth rearranged, stressed, fractured and changed faces over time in order to start building the Rocky Mountains, there was a thrusting action taking place up near where Glacier National Park, MT is today. As a layer of earth was fractured, part of itself moved up on top of another part of itself. Think of this like Neapolitan ice cream. First there were three layers of strawberry, vanilla and chocolate. The Strawberry was the newest, vanilla in the middle and the chocolate was the oldest and was originally over three miles below the earth's surface before the thrusting action. After this thrust fault was done with it, there are now six layers; two layers stacked on top of each other in the pattern of new, medium, old, new, medium, old. As the elements of time wore down the top strawberry and vanilla layers, there is this extremely old chocolate layer sitting upon the three layers below it of young, medium and old that is still over three miles down. This old (chocolate) layer is anywhere from 1,300 -1,500 million years older than then new strawberry layer below it. This is what exposed these old, Precambrian layers with detailed, greatly preserved simple lifeforms that give way to what the earth was like before it became Glacier National Park.