Death Valley: The History of the Hottest Place on Earth

The portion of the Mojave Desert contained in Death Valley National Park is the Driest and hottest place in the United States. Near Badwater, in the long trench of the desert between the Panamint Range on the west and the Black Mountains on the east is the lowest dry land in the Western Hemisphere – 282 feet below sea level. A showcase of desert extremes, the park includes one of the largest saltpans on Earth, dramatically faulted landscapes, young volcanic craters, and massive dune fields. 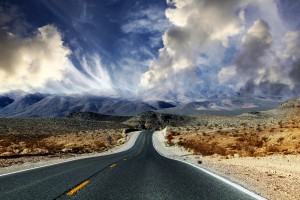 Somehow, at least four native cultures managed to survive here as long as 10,000 years ago. The Navarres Spring People hunted here and in the neighboring Panamint Valley around 7000 BC when small lakes were still here. The Mesquite Flat People and the Saratoga Spring People were more advanced hunter-gatherers that could sustain the ever-increasing temperatures of what would become Death Valley. About 1000 years ago, the nomadic Panamint sustained here on wild game, mesquite beans, and pinyon pine nuts found along the mountain ridges and the valley bottom.

As with most early references to California, it was the great Gold Rush that brought the first European explorers and settlers through the valley, which just happened to be considered a potential shortcut to the supposed riches. About 100 wagons full of expeditionary got stuck in the valley back in 1849. Forced to burn their wagons and eat their oxen for sustenance while awaiting better traveling conditions, visitors can see the Burned Wagons Camp near the sand dunes today. Legend says that the area received its name from the memorable last words of one of these ill-fated lost forty-niners (the name was given to the gold-seeking pioneer prospectors who also were lured to California in pursuit of gold). This unfortunate wayward prospector mistakenly presumed that this stark valley was a 'shortcut' to his payday, and as he perished in the burning sun of the parched desert his last words were, "Goodbye, Death Valley," and this as the legend portrays, is how the valley received its accurate namesake.

The early 1900s and the mining boom in Death Valley brought many here. Their legacy today remains as a series of Ghost Towns that may be explored today. The most popular is Panamint city – the roughest, toughest of the bunch and the short-lived Chloride City, where three stamp mills and an old grave still rest. The biggest of these ghost towns was Rhyolite, which during its heyday had 50 saloons, more than a dozen shops, a Bottle House, train depot, and its own stock exchange.

No mention of the rich history of Death Valley National Park is complete without mentioning the bizarre tale of Scotty's Castel, a Spanish-style grand mansion constructed in the 1920s in the middle of the desert. Head over to the castle for a tour and to hear about the lies, lure, legends, and mystique surrounding this remarkable oasis in the desert.

Although set aside by President Hoover in 1933 as a National Monument, Death Valley National Park wasn't wholly recognized in its current state of 1.3 million protected acres until 1994's Desert Protection Act was passed, and today these lands preserve some of the globes most fascinating flora and fauna.

Choosing when to visit Death Valley is up to the traveler as the park is open all year; however, all types of hiking in the valley are not recommended in the summers which can surpass 120 degrees. Dehydration is the second leading cause of death within the park, and the best time for outdoor pursuits is the springtime when the blooming wildflowers surface and park traffic increases. Winters are temperate with occasional storms, but one should be prepared for anything and everything in a place called Death Valley regardless of the season.

For those expecting only barren sand dunes, the park's Badlands and Badwater Basin may be the biggest surprise. The eroded country around Zabriskie Point puts on a much better, and more convincing, show in real life than did Antonioni's 1970 movie of the same name. The scenery of Death Valley National Park may look familiar from other films such as Star Wars, Return of the Jedi, Twilight Zone, and Robinson Crusoe on Mars. Biking Death Valley is very popular, and with landscapes ranging from the lowest in the world to the 11,000-plus foot apex of Telescope Peak, it is easy to understand why this place is such a draw.

The topography along the Artists Drive, just south of Furnace Creek boasts truly unbelievable colors. Furnace Creek is the only place in the park with a campground, and there is also a Visitor's Center here and a historical museum. This is where the ranger-led tours, hikes, and outings are available at no cost to visitors, and the center is open every day. Beyond the Great Sand Dunes and the Eureka Sand Dunes, visitors make the arduous journey out to the mysterious Racetrack Playa, where massive boulders seem to move and shift for no reason.

Two of Death Valley's most interesting creatures are the desert tortoise that lives here, which can live to be as old as 80 years; however, the current raven population threatens the species and the park is addressing solutions. The most fascinating by far is the Death Valley Pup Fish, and this is the only place in the world it exists. In fact, 21 species in the world only exist and survive here, making Death Valley an ecological and wilderness sanctuary relished by scientists worldwide.

Panamint Springs Resort is arguably the most convenient lodging in Death Valley National Park. Situated just 10 miles from the west entrance, this remarkable resort boasts quick access to 4-wheeling, hiking, biking, and is a short hike from a stream featuring a 20-foot waterfall. With just 14 rooms and one cabin, expect to get first-class personalized service and amenities at Panamint Springs Resort, a premier Death Valley lodging option.

Enjoy views of the mountains or of the Mesquite Flat Sand Dunes from cozy rooms at  Stovepipe Wells. This pet-friendly lodging at Death Valley National Park boasts an onsite saloon, gift shop, restaurant, and amenities that make Stovepipe Wells an ideal Death Valley lodge for couples, families, and even large groups.

Only ten minutes from Death Valley National Park is the Atomic Inn. A very unique motel offering up to 54 units. ...
Read More

Lodging In & Near Death Valley

The variety of Death Valley Hotels is as varied as that of the park itself. Death valley is one of the most extreme and diverse locations on earth. ...
Read More