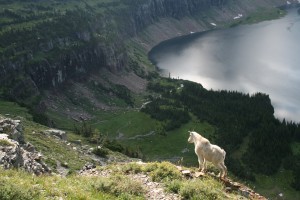 The breath of awe-inspiring natural beauty and endless recreational activities within Glacier National Park may initially surpass the depth of the region’s equally as captivating history. However, as visitors come to embrace the glory of the scenery, their minds inevitably become curious about the park’s past – its formation, the early settlers and pioneers who made it possible, its one-of-a-kind architecture, and how the development of the Great Northern Railway played an intrinsic role in what is now Glacier National Park.

Today, Glacier National Park’s one million acres of pristine landscapes include diverse habitats of glacial-carved valleys, rugged peaks, lush meadows, clear lakes, and alpine forests that create ecologically sustainable homes for nearly 70 mammal species and 270 species of birds. The park receives its name from the glacial results of the last Ice Age that left its mark on these lands over the past 12,000 years and of course, the remaining glaciers observable today.

Receding glaciers slowly exposed bedrock and deposited materials that tell of a past of ancient seas, the uplifting of giant slabs of the earth’s crust, and a surplus of geological faults. These actions over thousands of years ultimately revealed younger strata, created magnificent outflow lakes, valleys, and glacial cirques, leaving behind some of the planet’s most visually stunning scenery.

Archeological evidence places several Native American settlements within what is now Glacier National Park an estimated 10,000 years ago, with the earliest settlers boasting lineage to Flathead, Salish, Shoshone, and Cheyenne tribes. Natives referred to the area as the “Backbone of the World” and the “Shining Mountains,” and they frequented the mountains during spiritual quests. The arrival of the Blackfeet in the early 18th century solidified the native’s dominance of the region; however, settlements and treaties in the mid-1800s would later define Flathead and Blackfeet territories, which now exists surrounding Glacier’s expanse.

Pioneers Who Made the Park Possible

Although the Lewis and Clark expedition ventured within 50 miles of the park’s yet-to-be-established territory, several other explorers traversed the region in its early days. Yet, it wasn’t until George Bird Grinnell visit in the 1880s that interest in preserving the area came about. Under his guidance and persistent inspiration over two decades, these lands were ultimately deemed a forest preserve in 1900. Interestingly enough, the existence of the Great Northern Railway and its route across the Continental Vide at Marias Pass near the land’s southern boundary certainly fueled the park’s first step towards national status.

The Great Northern Railway – Making Glacier Accessible to All

In 1910, Glacier National Park was established by legislative processes under considerable influence from the Great Northern Railway’s president Louis Hill, George Bird Grinnell, and other advocates for its preservation and expansion as a tourist destination. Promoting the area as the American Alps and offering easy access to the park via rail, quickly led the development of what would become one of the largest collections of Swiss-style chalet structures in the nation with the construction of several remarkable in-park lodges.

Noteworthy and certainly mentionable in their own right, Hill’s vision resulted in a series of lavish backcountry chalet developments of which the Many Glacier and Glacier Park lodges comprised the core. The unique, Swiss chalet architecture served to enhance every aspect of visitors’ stay, and each was carefully designed to encompass the dramatic scenery and backdrop of the park. The cautious planning of each structure’s development strived to preserve the lands and ecosystem allowing 92 percent of the park’s natural glory intact.

There are 350 standing structures within the park listed on the National Register of Historic Places including patrol cabins, ranger stations, and fire lookouts. Some of the earliest in-park lodges still in operation today include Granite Park, Sperry, and Belton Chalets while the former Two Medicine Chalet now operates as the Two Medicine Store.

Come experience glorious views, thrilling adventures, and the bounties of nature at Glacier National Park while embracing its rich and exciting history.

The Amazing Region of Many Glacier

The Amazing Region of Many Glacier ...
Read More

Built as an overnight lodge for Great No...

The Cottages at Glacier

The Cottages at Glacier rest on a hill o...

Adjacent to the only 36-hole golf course...