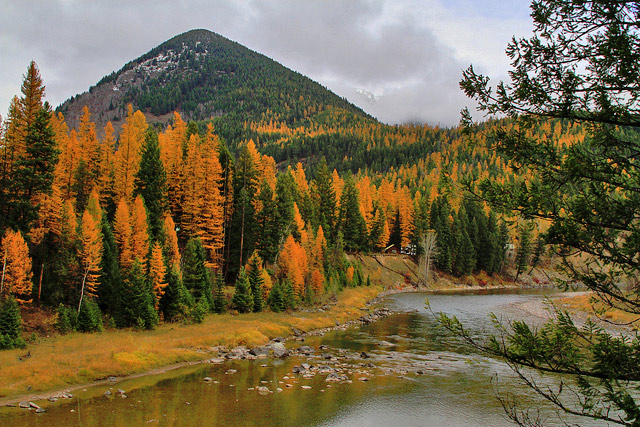 Glacier National Park often boasts two autumns each year.The first being the transition of the cottonwood and aspen trees from their green summer dress to their autumn gold splendor. These trees are found in various regions throughout the park, but they are more common along the rivers and lake shores in the lower elevations. The first autumn can often begin in mid to late September along the west side of the park.

The 'second autumn' begins when the western larch or 'Tamarack' - (a deciduous conifer that is quite common to the area) - begin changing to brilliant gold before dropping their needles. This second autumn generally occurs in mid-October.

Many of the mountains along the western side of the park are largely covered in western larch, and this second autumn results in spectacular displays of gold that stretch far up the mountain walls, giving way to snow-capped alpine peaks.

Keep in mind, weather can be quite unpredictable during this time of the year, and many of the lodges inside the park close down in late September, so you will have to plan ahead and make arrangements for lodging in one of the gateway communities of the park.

Built as an overnight lodge for Great No...

The Cottages at Glacier

The Cottages at Glacier rest on a hill o...

Adjacent to the only 36-hole golf course...